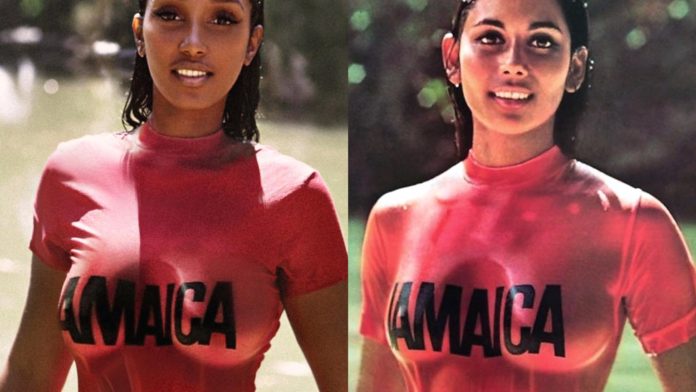 The Puerto Rican model/video vixen teamed up with Beauty Curato/Businessman Facet earlier this year to recreate the photograph. “I always wanted to redo this classic,” Burgos said. “So when the opportunity presented itself i couldn’t turn it down, i’m very happy with the results and i hope people love it too.”

Story Behind The Legendary Photo

Trinidadian Sintra Arunte-Bronte, is the 1972 poster girl for the Jamaican Tourist Board (JTB) which graces the walls of airports, the JTB’s offices worldwide and travel agencies across the world.

As the story goes, Sintra, who is now a Director of AJ Mauritzen in Port of Spain, caught the eye of an American photographer who was looking for the image of an island girl, after he was given the job to produce the poster. Sintra was visiting Jamaica at the time. In an interview with Jamaica’s Showtime Magazine, Sintra admitted that she never thought the poster would have such an impact, revealing that it took “seven and a half hours to capture the right effect.”

“I thought of a Jamaican man I had fallen in love with from the first day I set my eyes on him. That picture was dedicated to him and will be for the rest of my life,” she told the magazine, explaining how she captured the look. She got a few dollars for the photo, but never had any royalties.

“The impact of the poster immediately triggered a number of fairytale events in Sintra’s life. A boat owned by a wealthy Montego Bay businessman, John McConnell, was named after her, so too was a race horse and two years ago, a Swiss company named one of the watches from the Rado line, Sintra,” Showtime reported.

She is married to William Bronte, a Trinidadian businessman and has no children.