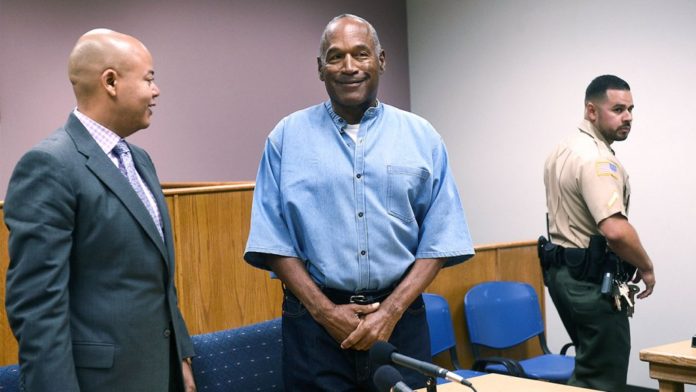 Former football legend O.J. Simpson became a free man Sunday after serving nine years for a botched hotel room heist that brought the conviction and prison time he avoided after his 1995 acquittal in the killings of his ex-wife and her friend.

Simpson was released at 12:08 a.m. PDT from Lovelock Correctional Center in northern Nevada, state prisons spokeswoman Brooke Keast told The Associated Press. She said she didn’t know immediately where Simpson was headed in his first hours of freedom, adding an unidentified driver met him and took him to an undisclosed location.

“I don’t have any information on where he’s going,” said Keast, who watched Simpson in blue jeans, denim jacket and ball cap signing documents before his release. Her department released a brief video on social media of Simpson being told to “come on out” by a prison staffer. He responded “OK,” walked through an open door, and the video then cut to a nighttime street — apparently the prison exterior.

Tom Scotto, a Simpson friend who lives in Naples, Florida, said by text message that he was with Simpson after his release. Scotto didn’t respond to questions about where they were going or whether Simpson’s sister, Shirley Baker of Sacramento, California, or his daughter, Arnelle Simpson of Fresno, California, were with him.

The three had attended Simpson’s parole hearing in July at the same prison where Simpson spent his prison term and was released just minutes into the first day a parole board set for his possible release.

Simpson has said he wanted to move back to Florida, where he lived before his armed robbery conviction in Las Vegas in a September 2007 confrontation with two sports memorabilia dealers. But Florida prison officials said documents weren’t filed, and the state attorney general says she doesn’t want Simpson to live in the state.